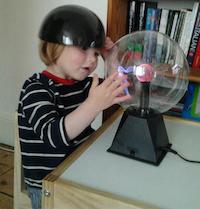 Ladies and Gentlemen, step right up – You’ll be amazed as babies, toddlers, and preschoolers read your mind!

The video above shows that children have a narrow understanding of others’ minds until around 4 or 5 years of age. It is at this point that they typically understand false beliefs. That is, children of this age understand that they might have knowledge that someone else doesn’t have. In one false belief task, the Sally-Anne task (originally involving Maxi, his grandpa, and chocolate), children watch one doll, Sally, put a marble in a basket. Sally leaves, and then another doll, Anne, moves the marble to a box. Anne leaves and Sally returns. The big question is, where will Sally look for the marble? You can probably figure out that Sally will look in the basket, where she left the marble, because she doesn’t know it’s been moved. But children under 4 typically don’t get this, and think she’ll look in the box, because that’s where the marble is. False belief is an important milestone showing when children understand that different people have different thoughts and beliefs.

Many people who have heard of Theory of Mind think this is synonymous with false belief understanding, making it appear as a magical switch that happens sometime between 4 and 5 years. However this is an over-simplification. While children under 4 typically can’t pass this task, there are many other ways in which they can read others’ minds. One way is to understand that others’ desires can be incompatible with their own. Repacholi and Gopnik tested this in 14- and 18-month-olds. When given a choice between crackers and broccoli as a snack most (though not all) toddlers will go for the crackers, hands down. But what will toddlers think other people will prefer? When watching an adult happily eat crackers, but show her disgust at eating broccoli, both 14- and 18-month-olds tended to later offer the adult crackers as a snack instead of broccoli. However, when the adult showed she loved broccoli, but found crackers disgusting, only the 18-month-olds later offered her broccoli. The 14-month-olds mostly offered her crackers once again. This suggests that 14-month-olds are fairly ego-centric when it comes to understanding desires. If they like something, everyone likes it! However by 18 months, most toddlers (but not all) understood that different people like different things. This is also a Theory of Mind skill, perhaps not as sophisticated as false belief understanding, but perhaps also an important step in forming full Theory of Mind.

Another aspect of mind-reading that many toddlers can do is understanding others’ intentions. Carpenter and colleagues discovered that most toddlers can tell the difference between intentional and accidental actions. They showed 14- and 18-month-olds new objects. An experimenter performed two actions on the object, e.g., pull on a string and say, “There!” and flap a piece of wood and say, “Whoops!” after which something fun would happen with the toy, such as a light turning on. Toddlers as young as 14 months were much more likely to copy the intentional action (There!) over the accidental action (Whoops!) suggesting they understood the experimenter’s intentions. Understanding intentions, like understanding desires, is another form of mind-reading which helps children navigate the world.

While understanding intentions, desires, and false beliefs are all big milestones in understanding others’ mind, other skills might be important to getting to this point. For instance, even in the first year, many babies gradually start to share attention with other people. For example, by around a year, many babies will point and look where other people point. This is an important development too, because it shows that babies can focus on the same thing as another person, and might even be trying to influence others’ minds.

So do we know everything about Theory of Mind yet? Well, actually we know quite a lot. However it’s still not completely clear how all the different bits fit together, especially early in development. That's why we are running the Early Social Cognition Survey this month, for anyone with a child between 0 and 47 months. We want to hear from you whether or not your child does any of the things mentioned here, and whatever your child's type of development (e.g., typical, Down's syndrome, deaf, etc.) When lots of parents fill out lots of surveys, we can start to piece together when and why children develop mind-reading abilities.

· Dr Elena Hoicka is a Lecturer (equivalent to Assistant Professor) in developmental psychology at the University of Sheffield, in England. Her research focuses on the early development of humour, pretending, deception, and social cognition.